I recently went on a hunt for a paint coating to apply to my stable of vehicles. My life has become too busy to keep up the maintenance routine of waxes and sealants that need to replied every few months.

I looked at the common suspects such as Optimum Gloss Coat, CarPro Cquartz, Gtechniq Exo, and so forth. The thing I couldn’t get past was the cost. Most of these products only come with enough to do one vehicle. I needed to do three.

That’s when I ran across the McKee’s 37 Paint Coating. It was affordable with claims of having enough to do 3-5 vehicles at around $45 for the bottle. It was also claimed to last up to 2 years. Sounded too good to be true.

A quick internet search turned up a few forum posts of people who had used the coating and they were extremely happy with it. It was said to be easy to apply, flashed off quick, and left little to no high spots once wiped off. I decided to give it a shot.

I purchased a bottle of the coating and a foam applicator. Fast forward a month and a new SiO2 fortified formula (that’s Silicon Dioxide also known as Silica or Quartz) was released that claimed to be thicker, easier to apply, and last longer. Plus, it came with an applicator for the same price. I hadn’t had a chance to apply the original coating and there was already a new one out!

I quickly contacted McKee’s 37 and sent a complimentary bottle of the new formula and a new foam applicator. 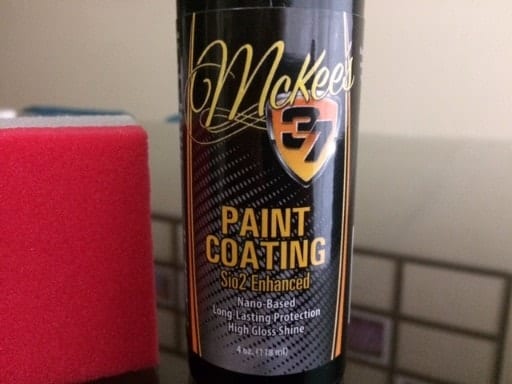 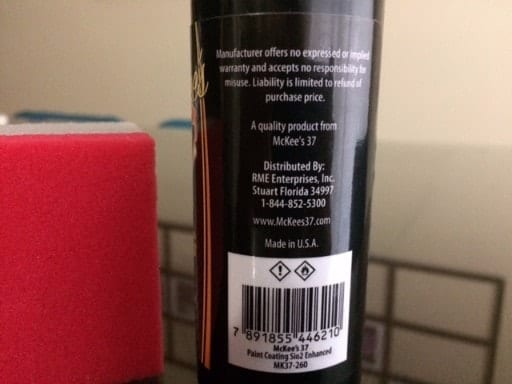 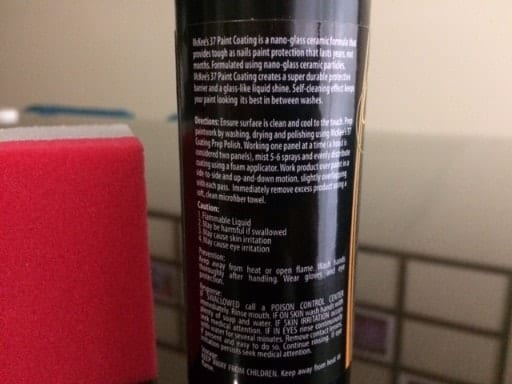 While waiting on the new formula paint coating to arrive I decided to go ahead and prep and coat one of my cars with the original formula. My prep process for any coating is to wash the paint with a non-wax containing shampoo,  decontaminate using an iron remover, clay bar the paint, compound polished the paint to remove any defects, and finally wipe the paint down with a wax and grease remover or prep polish such as McKee’s 37 Coating Prep Polish.

This leaves me a perfectly clean slate for maximum adhesion of the coating.

I started the application of the original formula coating.

The instructions say to spray the panel 4 to 5 times and then spread the coating out in an up and down and side to side motion. You then let the coating flash off (let the solvent in the coating evaporate) and wipe off the excess with a microfiber towel.

I followed these instructions and found the coating to be a little difficult to spread out evenly before it started to flash off. The coating was pretty grabby while spreading. I also had to rub harder than I liked to remove the excess coating with my microfiber towel to ensure there were no high spots.

Another dislike I had was that overspray was an issue. I found myself feverishly wiping down adjacent panels and glass when applying the coating so that it wouldn’t flash off and leave spots.

Once the car was finished there was a noticeable improvement in gloss and the paint had a new more grabby texture. I also found some high spots that I missed and that had already cured enough to not be able to wipe out with my microfiber towel. Fortunately this car was white so I can live with it.

Once I received the new formula coating I performed the same prep on my second car and began the application of the coating.

The instructions for this formula are a little different. There is no flash time. You spray the panel 5-6 times and wipe up and down and back and forth using the included applicator to work the coating into the paint. As soon as your coating is spread out evenly and in full coverage you wipe it off.

After spraying the coating on my first panel and beginning to wipe it was immediately noticeable that this coating was way easier to spread out. It’s also a little thicker so it was also easier to see it on the panel to be sure I had full coverage.

Wiping the coating off was also much easier. It was still a little difficult to fully wipe away, requiring multiple passes with the towel, because it made the surface a little more grabby.

I’m still not impressed with the spray application of this coating. I still had problems with overspray on adjacent panels that required quick wipe up to prevent spotting. On smaller panels I resorted to spraying the applicator and wiping on the coating to avoid the overspray. On the plus side, this coating doesn’t flash off right away like the old formula so wiping up overspray was easier. 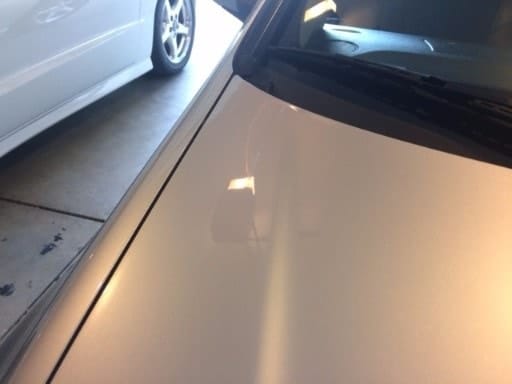 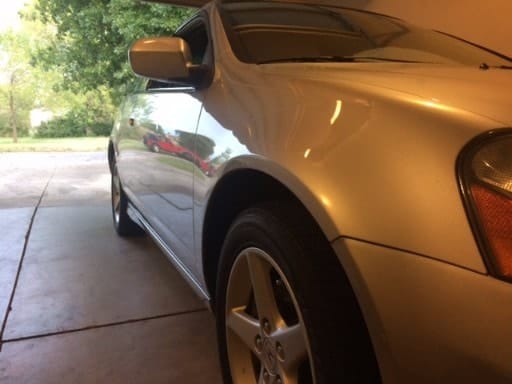 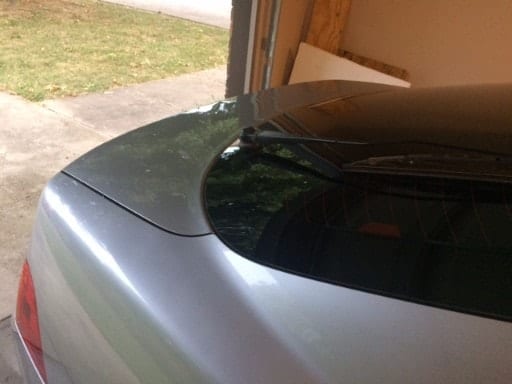 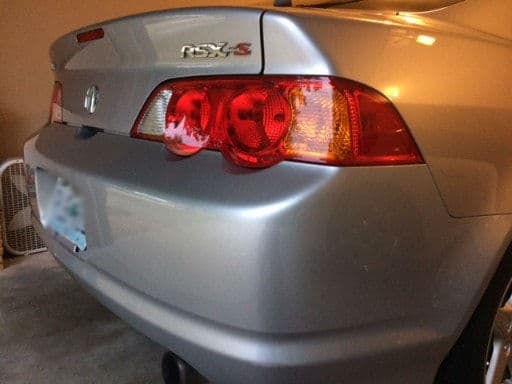 The new coating is definitely easier to apply. It does appear to be thicker. It’s also easier to prevent high spots. It applies and removes just like a normal wipe on wipe off sealant, requiring no fancy tricks to ensure a positive outcome.

The new coating is also much more hydrophobic. I washed both cars and the new coating had much less water remaining on it after flooding/sheeting the panels with the water hose.

Between the two, the new formula is a definite improvement. I cannot say which one will last longer yet since I just finished applying these coatings a week before writing this article. I will update this article as time passes. **Updated below**

The McKee’s 37 SiO2 Paint Coating lives up to its claims of ease of use and high-gloss appearance. I had no problems spreading this coating out evenly and wiping away the excess without leaving any high spots or streaks.

Once the coating was cured there was no change in appearance. I didn’t see any spotting and the gloss level remained.

The hydrophobic properties of this coating are spot on. As you can see in this picture the water beads nicely on the surface. 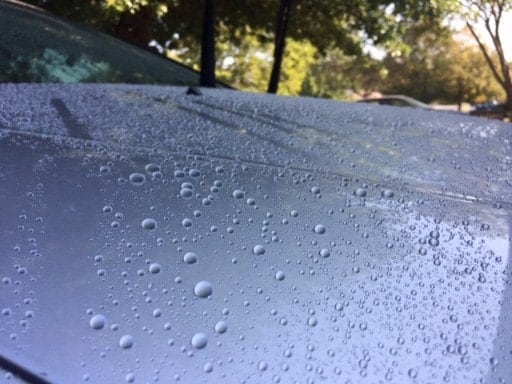 Once I used the technique of flooding the paint with water there were very little drops of water left to dry up. 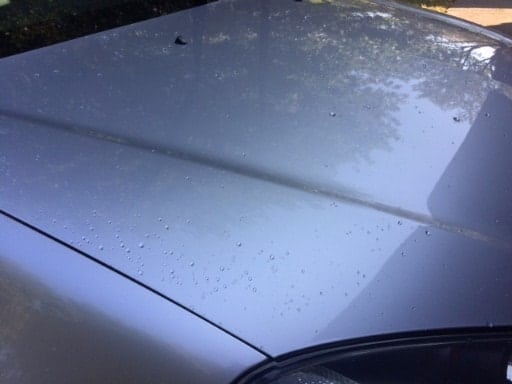 The coating also seems to be helping keep the car cleaner. I’ve driven in the rain once already and let the car sit outside during a rain. Both days the car dried to noticeably cleaner appearance than usual. Only the horizontal panels had minor spotting from dust settling into the rain drops as they dried.

I’m still not sold on the spray method of application. No matter how I sprayed it I always ended up with mist on adjacent panels and had to quickly wipe them down. This meant rewiping panels I had already finished which increased the amount of work I had to do.

I also ran into an issue where I failed to remove the nozzle and clear it of fluid before storing it resulting in a crappy spray pattern the second time I went to use the coating because some had dried to the tip of the nozzle.

This can obviously be mitigated by removing the nozzle and spraying it until it’s empty and then wiping off the tip but it wasn’t something I thought of because it wasn’t suggested anywhere on bottle or sales page.

Fortunately, I had an extra nozzle from the old formula bottle so it wasn’t a show stopper. It could be for you if you don’t follow that suggestion.

Update 1 (March 2018): It’s now 6 months later. The paint coating has been through a few months of rain, snow, road salt, and several washings. You can see below how the coating is still hydrophobic. 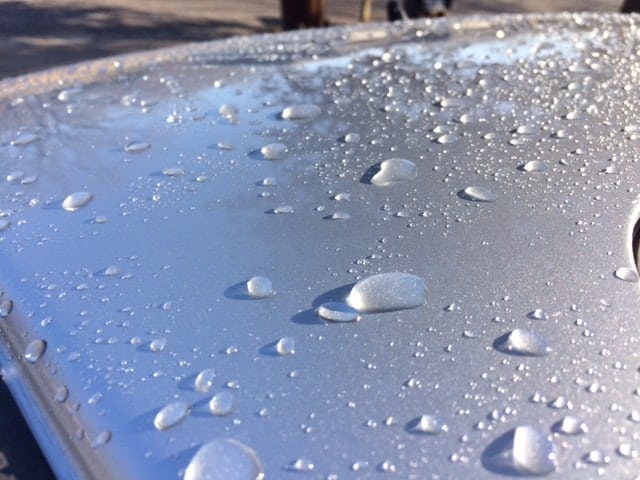 Dirt still washes off easily. I can get the car quite clean with just the hose. This coating has made keeping the car somewhat clean during a midwest winter much easier than when I used ordinary wax. I’m still quite satisfied with this coating.

Update 2 (November 2018): It has now been a year and a couple months since I first applied these coatings. The old formula coating on the WS6 and the new coating on the G6 both still bead water and look great. The G6 is still garaged at night  and at work but does sit outside during the rest of the day and is driven in the rain and snow. The beading on the G6 isn’t as dramatic as the WS6 or compared to the first application, but is still there.

The water beading on the RSX with the new formula has mostly diminished at this point but that car sits outside 24/7 including under piles of snow during the winter. It’s still way easier to clean than before the coating so I know the coating is still there to some degree. Compared to a wax like Collinite 845 the coating has lasted WAY longer so I’m still super happy. I’m sure an application of McKee’s 37 Hyrdo Blue would snap the hydrophobicity back.

Would I buy this coating again? Absolutely. The new formula is almost impossible to mess up. So far it does everything it advertises. It’s also a steal at $45 for a bottle that does 3-5 cars. That’s between $15 and $9 a car for a 2 year coating assuming it lives up the longevity claim. Compared to other coatings that’s a fraction of the cost and hard to pass up.

Would I recommend this coating to a friend? I already have. I think it’s a great coating for introducing people to paint coatings. There is nothing scary about it which is what turns many off of paint coatings and leaves them waxing on and waxing off endlessly all year long.