Claying your car is one of those love it or hate it kind of things.

On one hand it’s a very methodical relaxing motion that connects you with your car’s paint.

On the other, it’s a long and tedious job that is easily ruined when you drop the clay and have to toss it (not only out of frustration, but because it’s now contaminated).

Fortunately, there are now alternatives out there that take some of the pain out of claying.

The most popular alternative is the clay mitt, which Adam’s Polishes sent to me to test out and provide honest feedback.

Clay mitts provide most of the results of a clay bar and are cleanable and much faster to use.

The Clay Mitt came with a bottle of their Detail Spray, meant to be used as a claying lubricant. The spray had a pleasant aroma, as do most of Adam’s Polishes products. The mitt was neatly packed in a plastic no fuss packaging. 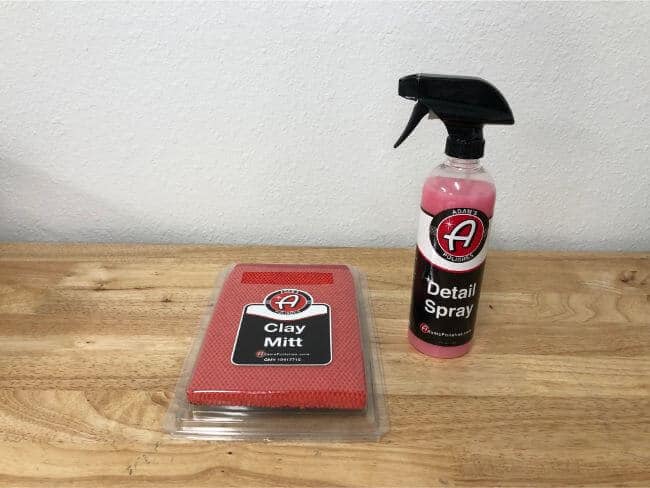 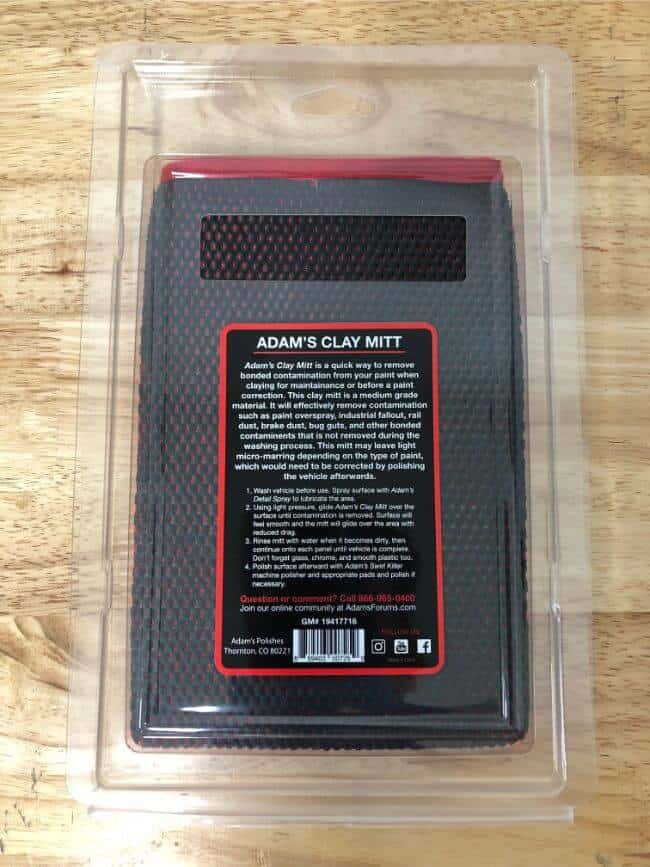 The mitt had to be peeled away from the plastic container, as have all clay mitts I’ve used, which I took as a good sign of its grabbiness.

Both the exterior and interior of the mitt have a pleasant, almost luxurious feel. The claying surface of the mitt wasn’t quite as dense as other mitts such as the popular Nanoskin Clay Wash Mitt. 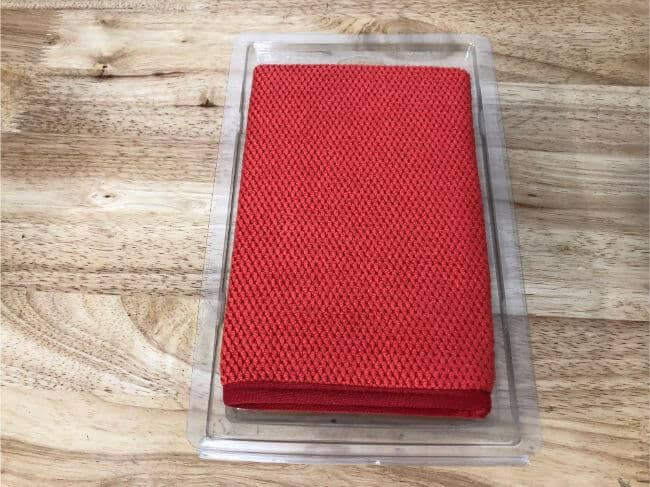 The size of the mitt is definitely on the larger side. I’d say anyone that can fit up to a large glove size would be comfortable using this mitt.

I tested the mitt out on the hood of a car that I was prepping for installation of a new paint coating.

I laid down a thick coat of the Detail Spray and began claying the surface with the mitt. The mitt had no trouble grabbing contaminates from the surface without sticking to the paint. 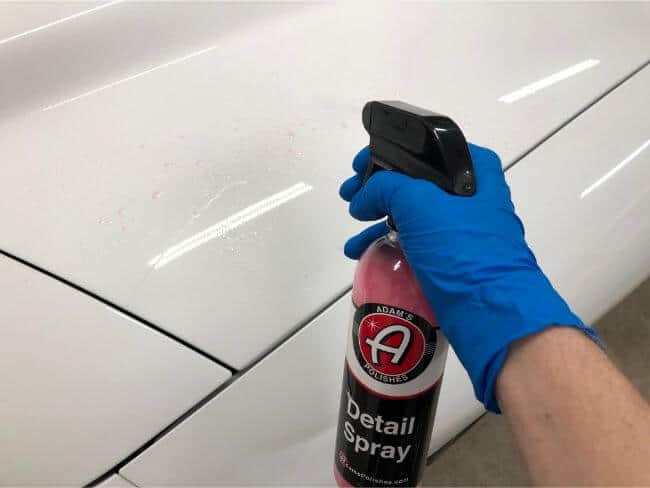 While much of the tactility of traditional claying is lost with the mitt, you can still still feel each pass getting smoother as you clay.

Once the paint no longer felt like it was getting smoother, I stopped and wiped away the excess with a plush microfiber towel. 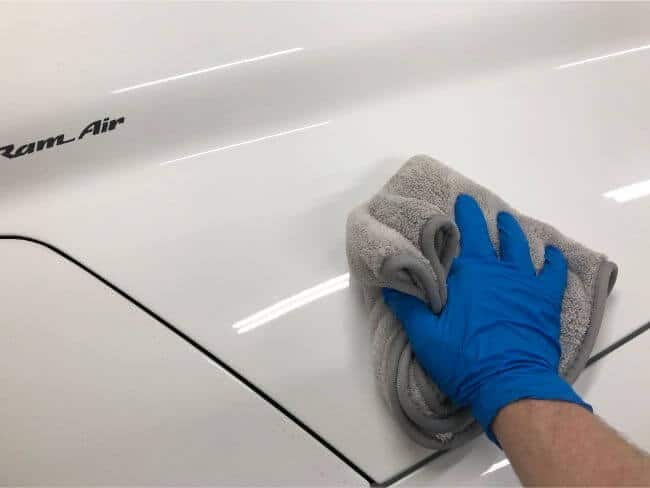 A quick run with the bag test and I could only feel the odd particle still left in the paint. Another quick pass with the mitt and these were gone.

If I had to label it, I’d say this mitt is closer to a fine clay than a medium one.

Even with the second pass, I still spent a fraction of the time claying with the mitt than I would have with a traditional bar. It was also much more enjoyable than traditional clay baring.

After finishing, the clay mitt showed no signs of falling apart, leaving me to believe it should stand up to the claims of 20+ uses. 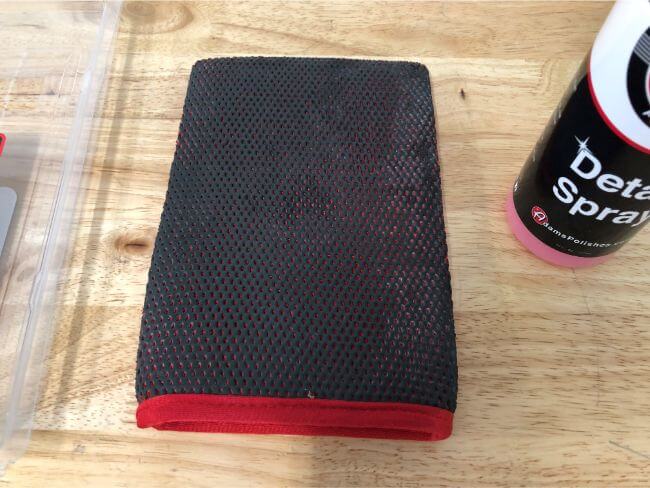 While the mitt feels very luxurious on the inside, it’s also a little too smooth. The mitt wanted to wander on my hands a bit. Something that doesn’t happen with some of the competing mitts, such as the Avalon King Clay Mitt that is included in their Prep Kit.

The towel worked but quicker than clay but you kinda had to guess when the paint was smooth. Something traditional clay gives a much more pronounced indication of.

The detail spray was sufficiently slick to keep the mitt moving and prevent it from sticking to the paint. Using the mitt with a spray like this, as you would traditional clay, is actually my least favorite way of using a clay mitt.

I prefer to mix up a bucket of claying solution or concentrated shampoo and dipping the mitt in the solution to get it really good and soaked. It then self lubricates and makes things much quicker. This is how I’ve learned to use my Nanoskin mitt and even how Avalon King instructs you to do it in their Prep Kit.

That said, the spray application works, it’s just not as quick as it could be and it consumes a lot of pre-mixed product.

In the end, the clay mitt works exactly as advertised. It’s made well and looks great as well.

The included detail spray makes a good lubricant and can be used for a variety of other purposes when you’re finished claying, if you have any left.

Overall, if you’re looking for a ready to use package, it’s a great value.

If you appreciate what we do on The Art of Cleanliness, you should consider:

We are thankful for your never ending support!